When we talk about air and spaceflight, the materials used to construct the aircraft and parts are critical. Different metals have different properties which make them more suitable for certain applications. Let's talk about some of the common metals used in aerospace and which properties they boast that makes them optimal for this application.

Click Here for our Ten Facts About Centerless Grinding Infographic

Traditional aluminum is still a common material in aerospace machining, but the way it's being crafted is not the same as it was in the past. More and more aircraft structures are made of newer alloys.

One of the key properties for developing an engine is resistance to heat. The metals that make up the engine must be able to withstand temperatures in excess of 3,800°F or 2,100°C. The materials capable of this include titanium alloys, nickel alloys, and nonmetals such as ceramics. Ceramics are tough to shape, but alloys are tricky to mend and mold without risking the loss of structural integrity.

The next priority for aerospace engineers is the weight of the material.  After all, the craft needs to be strong enough to resist the force of gravity, so the less weight it needs to lift, the less energy the engine needs to exert to keep the craft in flight, which also translates to improved fuel efficiency and safety for passengers. This is where composites come in. These are comprised of both metals and plastics, as well as a precise amount of additives, leading to increased wear resistance and decreased rates of fatigue. The three main types of composites are carbon fiber, glass, and aramid-reinforced epoxy. The wings on Airbus' A350 series, for example, are made of more than 50% carbon fiber. 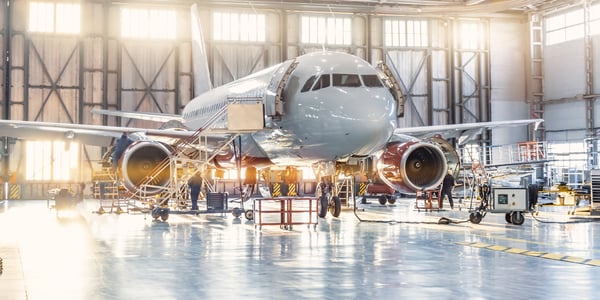 The Aerospace industry requires the unique qualities of many materials to continue to push it's limits.

Sometimes, though, aerospace manufacturers aren't after shear heat resistance. Since aircraft are particularly susceptible to lightning strikes, being able to fight electrical forces in the sky is a particularly important trait. To combat this, the use of nanoparticles such as metal-matrix nanocomposites has increased over time. These are renowned for their high tensile strength and electrical conductivity. There are other variants including polymer- and ceramic-based versions.

Graphene is another material used for electrical application reasons. It is used in epoxy resins to increase the electrical conductivity of carbon composites in fuselages. In a conventional commercial aircraft, there may be as much as 60 miles worth of copper wiring to transmit power and communication, so having a conductor like graphene to pull excess electricity away from the wiring can be very important. As an added benefit, graphene helps make wings more efficient by reducing weight and fuel consumption.

Aerospace manufacturing as a field is always pushing for the next technical innovation. Sometimes this innovation comes because someone is willing to test a new material in an ingenious way. How will aerospace engineering look in 5, 10, or 20 years? We don't know today, but we sure are excited for that future.