There are many types of grinding methods, each with their own applications and techniques. One of our favorite methods is known as cylindrical grinding, in which cylinder-shaped parts (surprising, I know) are finished to achieve a mirror-finish and exceptional performance on the inside diameter (ID), outside diameter (OD), or sometimes both. But how did the technology upon which grinding is built arrive at cylindrical grinding as we know it today? Let's discuss.

Click Here to Read About the History of Aerospace Manufacturing

Grinders have been around for thousands of years, ancient humans ground holes in stone axes and hammers. The Ancient Greeks cooled grinding stones using water and oil. By the time of the Renaissance, Leonardo da Vinci invented a needle grinder which could automatically load and unload the needles.

All machining, though, has its origins in John Wilkinson's boring machine--which he built in order to manufacture more accurate cannons in 1774. His machine paved the way for metalworking as a whole. The Industrial Revolution was an important milestone for grinding and machining because of the increased accessibility of steel and the spread of metalworkers. More steel production meant a greater need to refine and finish it more efficiently, so grinding wheels needed to be improved.

Cylindrical grinding in the modern sense is most readily traced back to Jonathan Bridges and James Wheaton--working independently from each other--in the 1830s as they sought to combine the grinding and machining aspects, though It is unknown who actually produced the first cylindrical grinding machine. 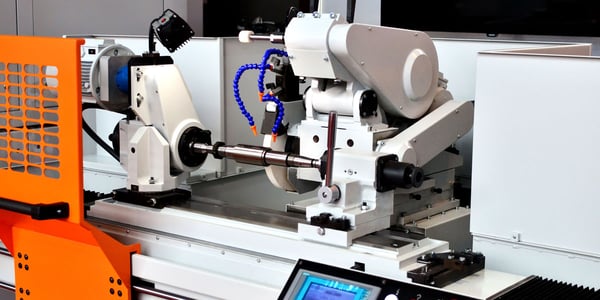 It wasn't until 1874 when the Brown and Sharpe company of Providence, Rhode Island marketed the first cylindrical grinding machine. They had built a sewing machines to be used in a residential setting. They believed the shaft and needle bars of the sewing machine needed to be crafted from hardened steel, so they experimented with cylindrical grinding. They achieved this by mounting a small grinding wheel to a lathe. Though simple, the machine was effective: capable of grinding the workpiece within a 0.001mm tolerance.

But even with this precision in mind, Charles Norton, an employee of Brown and Sharpe, departed his former employer with the conviction that cylindrical grinding could achieve much more than just finishing the workpiece: he wanted to put more emphasis on the process with added precision and reliability. He started his own company, Norton Grinding Company (now Norton Abrasives), built on his belief, as well as his vision of cylindrical grinding machines becoming a mainstay in machine shops everywhere. Norton continued to push for the improvement of cylindrical grinding: using higher RPM values to achieve even tighter tolerances.

In the 1940s, the US Air Force was looking for ways to more efficiently and affordably craft plane parts for World War II, which brought Numeric Control (NC) machining into the industry. By the 70s and 80s, computers were used to direct NC--and CNC machining was born. CNC was combined with cylindrical grinding, which allowed the computer to control the grinding wheel, leading to even more precise results, and bringing us to the present and as IPG continues to push the limits of the technique we hope to see the future of cylindrical grinding as well.